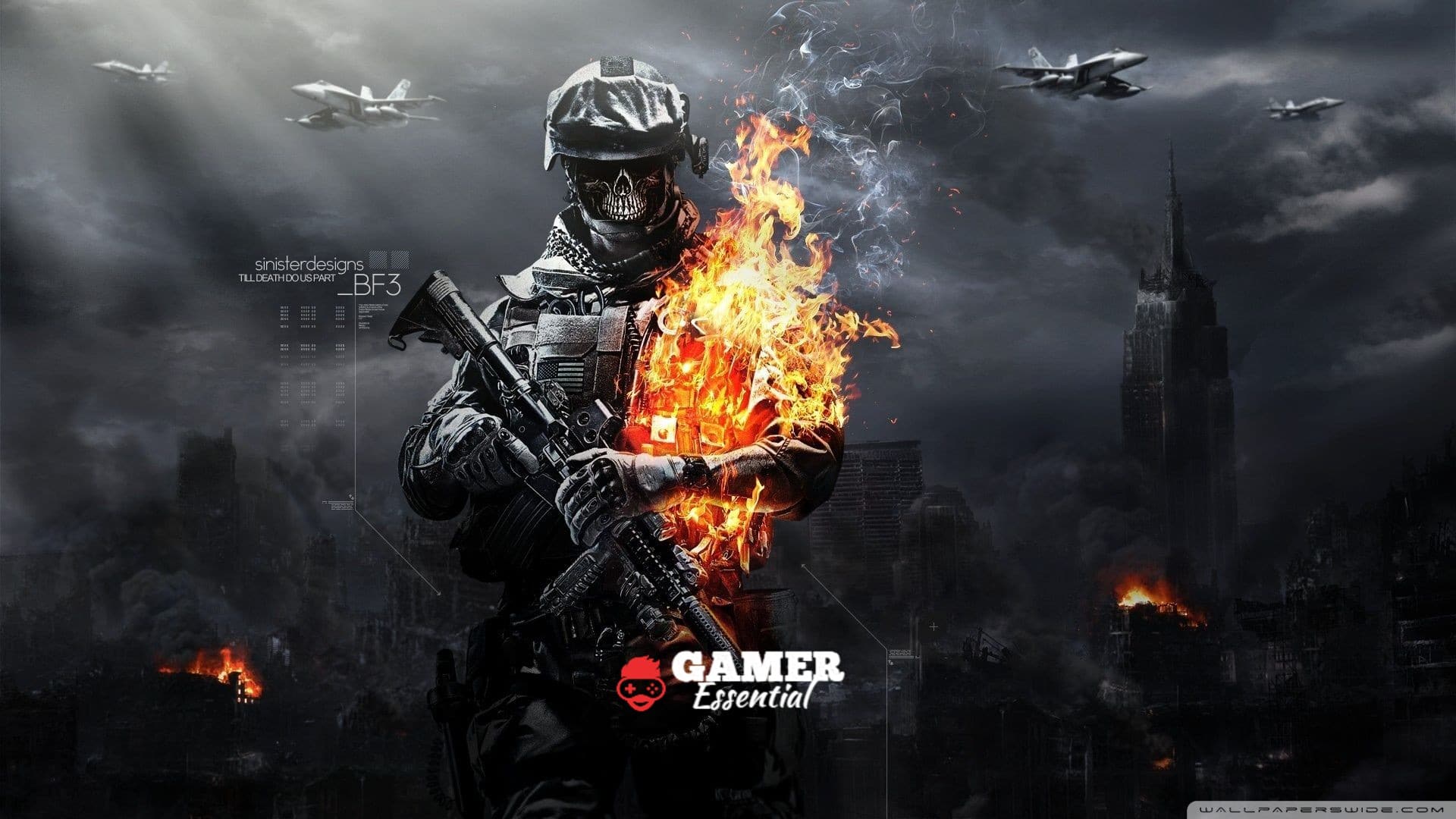 Battlefield 6 has been in the headlines of all video game news websites, and now it is confirmed that the much-anticipated game will be released for consoles and PC this year, with a phone spin-off expected next year. Let’s take a look at what’s new with Battlefield in this game news article!

Via a recent blog post, EA formally revealed that a new Battlefield game is in progress for both console and PC. The next Battlefield video game will be released in the Holiday season of 2021. It is the product of a major partnership between four studios: EA Gothenburg, DICE Los Angeles, EA DICE, and Criterion.

Previously, EA revealed that Criterion, the studio behind Battlefield 5’s Firestorm battle royale mode, had been hired to assist EA DICE in the development of the next Battlefield title. Today’s game news confirms that the game is already on the schedule for a 2021 date and that it could be more extensive than we initially believed, with four developers from across the world assisting.

According to an EA official last month, Criterion was hired to help create the unannounced Battlefield game with EA DICE. Criterion’s Need For Speed video game has been placed on hold for the time being, as both studios focus their efforts on releasing Battlefield later this year. Whatever the final game looks like, we will just have roughly two months before we have our first peek at the next Battlefield.

DICE also confirmed that the team working on Battlefield 6 is the largest in the series’ history, with four independent studios contributing to the project. Furthermore, the game will be made available to the general public “soon.”

According to EA’s blog post, the latest Battlefield video game will be released on next-gen consoles and PC with the support of developer EA Gothenburg. This confirms speculation earlier this year that the newest Battlefield game will be a next-gen exclusive for PS5, Xbox Series X, and Xbox Series S, rather than a PS4 and Xbox One release. There isn’t any verification of anything right now, but EA’s language strongly suggests a next-gen-only release.

The blog post on the next main Battlefield game concludes, “Get ready for the reveal soon.” This may be following recent rumors of the next Battlefield game’s reveal, in which a leaker said that the next shooter would be shown in its entirety in May.

DICE has yet to announce the platforms for the upcoming Battlefield game, aside from PC. On the other hand, Gabrielson’s statement seems to just hint at the fact that it would be on next-generation consoles.

Although confirmation of the PS5 and Xbox Series X is still pending, the statement does refer to certain platforms. It’s also a hint that previous-generation consoles may be discontinued.

EA has revealed a brand new Battlefield fps game for mobile devices. This game is “absolutely different” from the key Battlefield game previously described, and it is being produced by Industrial Toys with a 2022 release date in mind.

There isn’t much information available about Battlefield’s smartphone debut right now. The spin-off is reportedly in a testing phase, according to EA’s statement, so it seems that production is approaching completion, with a launch date set for next year. Let’s hope we don’t have to wait long for the complete reveal of the next-gen Battlefield game.

Tom Henderson, a well-known Battlefield leaker, has issued a newsletter detailing some fresh specifics regarding the unannounced Battlefield 6. Henderson says in the newsletter that Battlefield 6 has a somewhat futuristic atmosphere, located about 10 years in the future from now.

According to Henderson, Battlefield 6’s creators would be able to incorporate technology that is only now being tested by today’s military. Military robots, aircraft, and planes, as well as the regular helicopters and tanks, may be on display.

According to Henderson’s newsletter, Battlefield 6 would have a “revolutionary” campaign. You’ll lead a specialized team, and you’ll be able to choose between fighting for the United States or Russia. Additionally, the campaign would provide co-op assistance throughout, allowing you to battle with your mates in your unit.

Henderson wrote in his tweet that “You’re a group of individuals from fallen nations – You’re free to fight for whichever side you want. So, in theory, a Japanese soldier could fight for both the USA and Russia.”

The United States vs. Russia?

This claim comes after Henderson previously stated that the upcoming Battlefield will be featuring a “revolutionary campaign” when compared to previous Battlefield games.

The war, according to Henderson, would rely on the specialist team of the player, encouraging them to select the superpower they want to fight with rather than being trapped into one.

Henderson explained in a blog post earlier this year that in the game of Battlefied, there aren’t really Allies and Axis, since one can choose his own path. He added that both Russia and the USA would offer the option to recruit a specialist team and the skills during the campaign. This is to serve as an asset to all sides. He added that it looks like the campaign of this year would be a co-op experience.

Henderson also says that the Battlefield 6 release trailer would not have multiplayer or gameplay. The multiplayer will show greater and better fights and would be like “Battlefield 3 or 4 on steroids.”

Finally, Henderson confirms that the Battlefield this year will be known simply as “Battlefield.” This year’s shooter from EA has no extra flair, and we should assume a reveal trailer in May without real gameplay, which corresponds to what a journalist from Venture Beat previously said.

The first rumors of a 2021 Battlefield game surfaced in January when Henderson said that EA was planning the game’s maps with 128 players in mind. Henderson also said at the time that the unannounced Battlefield fps game will be highly influenced by Battlefield 3, which is excellent news for Battlefield fans.

According to other rumors, when Battlefield 6 releases, it would have crossplay and an unprecedented amount of map devastation, which will be very remarkable considering the size of previous titles, such as Battlefield 4’s “Levolution” mechanic. According to reports, the new installment would support up to 128 players, emphasizing Gabrielson’s PR talk of “all-out military warfare” and “big wars, filled with more players.” It’s unclear if the current playtesting is being performed to work out player counts correctly or whether it’s already in effect.

Given the failure of Battlefield V, it seems that EA is going all-in for the Battlefield entry in 2021. While there’s no assurance that it’ll be a hit with gamers, it appears that EA has put a lot of time, effort, and energy into this new title, and it’s unlikely that it’ll be written off without a battle.

Battlefield 6 is said to have expanded disaster mechanics, with one of the most intriguing aspects of this report being that natural disasters would be used in the title. The natural disaster mechanism in Battlefield 6 is said to be used to wreck structures and ruin locations, with leaker Tom Henderson speculating about some of the disasters that might occur. Floods, tornadoes, volcanoes, and violent storms are all expected to appear in the next game.

Completely destructible cities are another exciting aspect that has been speculated for Battlefield 6. Although maps like Battlefield 4’s Siege of Shanghai called for the destruction of the central building as part of the “Levolution” mechanic, it appears that any building in these new cities would be destructible. It’s unclear if this implies breakable glass on the sides of buildings or full skyscrapers collapses, but any building that is damaged in any form sounds like a positive move.

Will Battlefield 6 be on PS4 and Xbox One?

No, Battlefield 6 will not be available on PS4 and Xbox One. DICE announced that the 2021 version of Battlefield would only be released on PS5, Xbox Series Z & S, and PC in an official announcement on April 22. Hence the game will not have any support for PS4 or Xbox One.

According to DICe, the game would be “brought to life” by the “power” of next-gen consoles, which would fit with speculated explanations for the Battlefield franchise’s lack of a 2020 date.

EA revealed in a response to GameSpot in May 2020 that the game will be released on the latest consoles in order to target “new creativity that will be powered by next-gen platforms.”

This was the primary reason EA and DICE opted not to launch a Battlefield game in 2020, since the number of people who own a PS5 or Xbox Series X at the time will already be limited relative to what they would have a year later. That’s our video game news for the new Battlefield game.

Are you as excited as we are?