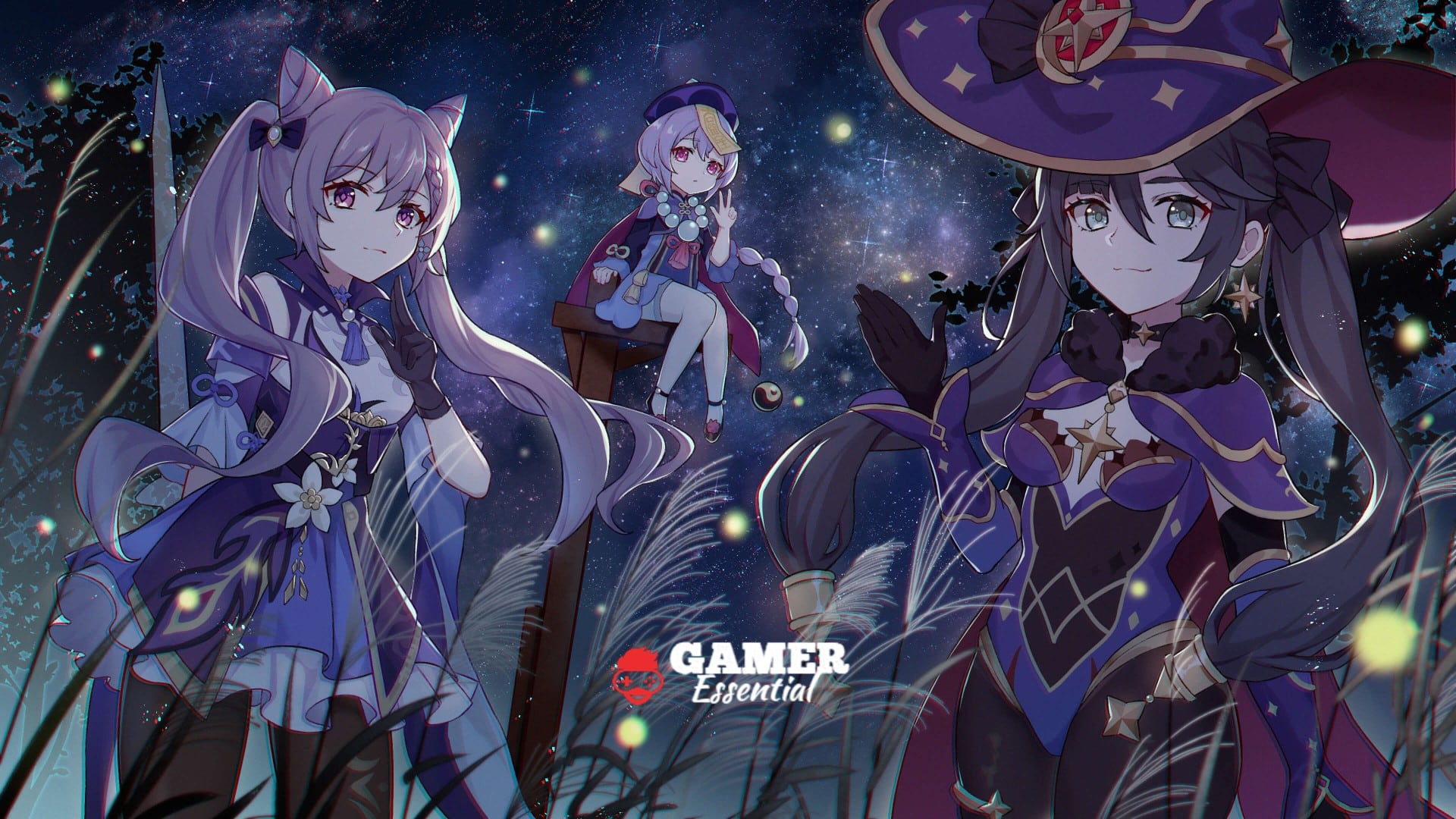 Avid fans of Genshin Impact are in for a treat, as the new version of this highly popular game is due to be released imminently. With much speculation about the 1.5 Update, developers Mihoyo, have attempted to withhold the details, to no avail. Many leakers have released details about the upcoming content including new characters and regions.

The official live stream on the 16th April 2021, confirmed much of the anticipated content for the new update — Beneath the Light of Jadeite. Genshin Impact New CharactersZhongli Is BackOne of the most anticipated characters, said to return as part of the 1.5 Genshin Impact update, is Zhongli.

With a new artifact set that seems to compliment his gameplay, don’t miss out on picking him up. Yanfei Four-Star Pyro CatalystThis half adept character is set to appear alongside Zhongli, bringing Pyro attacks that create a high level of damage, where she can incinerate her enemies in a ball of flames.

Her attacks and blast abilities, as well as skills, create Scarlett Seals around her, which help to protect her energy levels. She also has the unique advantage of being a catalyst character and like Ganyu, she is a part of Illuminated Beast. She uses her legal prowess to outsmart enemies, being an advisor in Liyue Harbor, and then she seals them away with her Pyro skills.

Yanfei can be leveled up through six phases with various ascension materials, which are not final yet, but which leaders have indicated, including Nine Teachings of Gold, 63 Guide to Gold, and 114 Philosophies of Gold that can be farmed at the Taishan Mansion domain.

Eula Five-Star Cyro CharacterQuite a lot has been released about Eula already, so we can look forward to a complex, powerful, yet graceful character with Cyro Vision, who boasts some fancy sword skills with her claymore weapon. She is the Captain of the Knights of the Favonius Reconnaissance Company and also the current Spindrift Knight, who has recently returned from a mission.

This explains her absence from Mondstadt, where she is a member of the ancient royal family. Featuring an elemental skill called Ice Tide Vortex, with a unique Elemental Burst of Glacial Illumination, Eula unleashes maximum physical and elemental damage.

She gets a stack of Grimheart when tapped and this makes her resistant to interruption and increases her DEF. Each time a stack is used, it converts into AoE Cyro damage and when Eula uses Glacial Illumination a small sword hangs above her which increases in energy and eventually explodes.

Baizhu and Yaoyao Dendro Characters While the latest game news indicates that these upcoming characters and the Dendro element may be delayed until Version 1.6, or possibly even longer, it is worth taking a look at Baizhu and Yaoyao.

These are expected to be the first playable characters holding a Dendro Vision. Yaoyao is already a popular character, being Xiangling’s disciple and assistant to Ganyu. Not much is known about her skill set yet, but she is said to be similar to Klee and Qiqi.

Players were introduced to Baizhu in Archon Quest and it is confirmed that he will to return as a five-star Dendron character with catalyst capabilities.

It is possible that he will have some healing powers, considering his herbal medicine background. He has a cute snake mascot, Changsheng, which is already boosting his popularity. It will be interesting to see what the developers implemented for their playstyle, considering that the Dendro attacks usually involve some kind of environment or ground manipulation.

Ayaka from InazumaAyaka is reported to be the first upcoming character to come from the much anticipated new region of Inazuma. She has distinct Japanese features, as the Inazuma region is expected to be based on Japan.

Zhongli refers to her as a Fox Girl, and she is also described as a high ranking shrine maiden by Ayaka, which is similar to the character from Honkai Impact, so it is easy to see why fans are jumping to this conclusion. There are other parallels between the two games, making the possibility of this new character being linked to Yae Sakura even more likely.

Other Genshin Impact Game NewsInazuma RegionThis land has been on the cards for a while now, with hints at it since the Beta Testing phase. However, there is more solid information of late, highlighting that parts of this region are coming very soon, either in the 1.5 version or the 1.6 version.

Certain files that have been discovered indicate a Summer Event Island Level which will take players to the islands surrounding Inazuma and files for the Electro Travelers have also been found, pointing to the imminent release of the Electra region.

Inazuma’s design is largely based on the landscape of Japan, with sneak peaks displaying a beautiful environment, rich with plant and animal life. With high expectations of a vast, highly diverse land, it is thought that Inazuma will be released in regions.

Housing System is ConfirmedThe anticipated Housing System was confirmed in the livestream event and players are really excited about this content update. It is expected that players will receive, what is called a Serenitea Pot, during a version 1.5 quest, from Madam Ping.

This Serenitea Pot can hold a realm inside it and players will be able to customize it with various items such as furniture that players will create. It is therefore expected that collecting wood in order to make furniture will be an achievement reward.

Realm Pets are ConfirmedThe livestream further confirmed that players will be allowed to have realm pets, which is exciting news. At this stage, there is limited information about how many pets players can have and if they can leave their realms.Lower Resin Costs for Weekly BossesIt was revealed on the livestream that there will be a reduction in the cost of resin for weekly bosses. There is also now a 4th weekly boss, the giant dragon Azhdaha. So, the three usual weekly bosses will cost 30 resin now instead of 60, but Azhdaha will cost 60 resin.

New Transient ResinAvid gamers will agree that resin depletes quickly and even though it regenerates and accumulates, this is not fast enough to keep up with all the rewards that bosses and domains drop daily. To solve this problem, the developers are apparently introducing Transient Resin in the 1.5 update, which can be purchased for 1200 Realm Currency when you reach the Homeworld level six or Trust Rank 6 in the Housing System. The transient resin allows you to replenish 60 Original resin with each use, and will offer no cap on resin usage.

Watch the Genshin Impact 1.5 trailer on the Mihoyo site for a more detailed look at some exciting new features.Gaming Platform News for Genshin Impact 1.5Mihoyo game developers have confirmed that the 1.5 version Genshin Impact download will be available on PS5, where console players will experience enhanced gaming features, higher 4K quality and faster loading times.

I need to emphasize however, that if you use this platform, you will not be able to continue gameplay in another platform, like a PC or mobile device, as there is no compatibility to save across platforms. This also means that certain events will be excluded on Playstation, but it can be an ideal way to boost performance if you have a group who all play on PS5. Read more about PS4 and PS5 games here.

PrimogemsGENSHINGIFT — 50 PrimogemsPrimogems, the premium currency, are usually hard to come by, other than by completing certain quests and events, so these codes were highly appreciated by the masses of fans watching the livestream event. Sign in to your profile and redeem the codes on the Genshin Impact website.

With new information being released continuously, ahead of the expected 28th April 2021 launch date, Genshin Impact players can expect the 1.5 update, Beneath the Light of Jadeite, to be the biggest, most artistic yet.